So we had sharks, ostriches and now we were moving on to ELEPHANTS and MONKEYS!

We made a stop at the Knysna Elephant Park. One of the reasons for coming here was to see the elephants up close and quite honestly, we didn’t know if we would see any on our upcoming safari trip to Kruger National Park and we wanted to make sure we left South Africa with an elephant sighting under our belts!

We saw a lovely video before leaving the main building. It was all on the people who started the sanctuary and the elephants that have come in and for various reasons. It was so great to watch ans see all the good they are doing for these majestic animals. 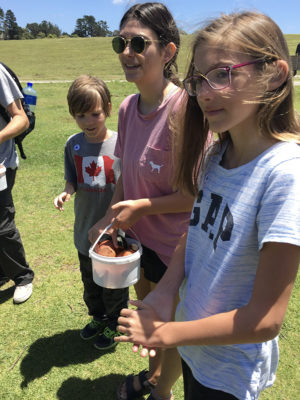 Soon after the short video was done, we boarded a small tram that that took us out into the field where we would be able to learn more about the elephants and have a very limited amount of interaction with them.

First we fed them. We had purchased a couple buckets of fruit and veggies and lined up and took turns letting the elephants take the pieces from our hands. Super cool experience and just so you all know, a very slimy experience!! haha 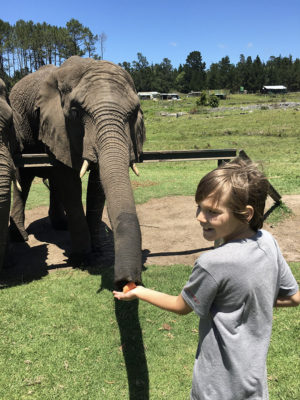 After feeding we were divided up (other people were with us on the tour) and each small group had a guide and we were taken to our “own” elephant. The tour guide explained all about our animal and answered any questions we had. We had a quick chance to each take a photo with our elephant while she ate some grass. We were lucky to get the photos as our elephant was the Teenager and kept taking off. They roam free here so the trainer/tour guide didn’t make her come back. That was ok though, it was so neat to be in the same area anyway. Plus, while our elephant was off doing her thing we got a chance to watch the Zebras that also shared the space. 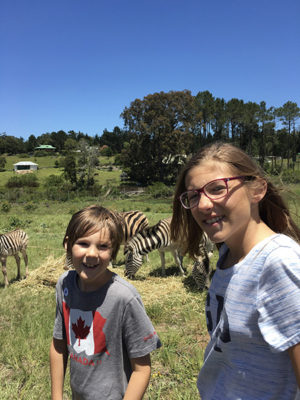 Leaving from the elephants we had one more fun thing planned. We went to Monkeyland. We had a cool time exploring with our guide. He was knowledgeable and did his best trying to be funny :0. 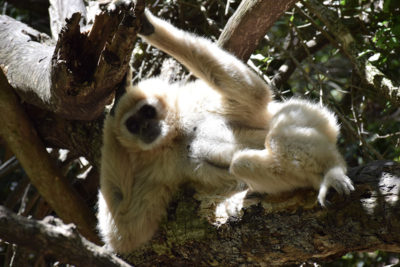 Monkeyland had many different kinds of monkeys from all over the world, not just South Africa. There were monkeys in trees, laying in the sun, climbing the fence. All just doing their own thing while we walked through the trees and watched them. It was so neat. We did have to be on alert for one particular group that liked to steal lose items off people. So all sunglasses (and Avery’s glasses) had to go away. No worries with that in the end, we all left with everything we came in with. 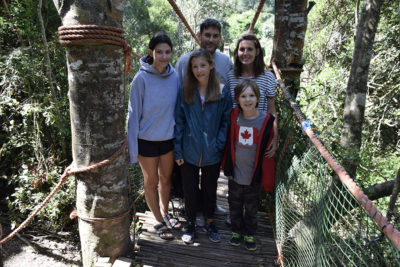 Hanging out with Ostriches