Jordan was a location that we added in after our travels started. A last minute decision and that meant even less planning than usual (not that we planned too much). We knew that we wanted to see the Dead Sea.

We drove out of Madaba and surprisingly were able to follow the signs and use the GPS in the car quite well. The Dead Sea is obviously a popular place and there was lots of signage. We also noted that along the route to the Dead Sea were many, MANY police and military vehicles stationed along the road. I will say there was a group about every kilometer. A heavy military presence was a little concerning at first but after a bit it became more of a comfort. Not sure I ever got use to seeing the machine guns mounted on the tops of the vehicles though :/ 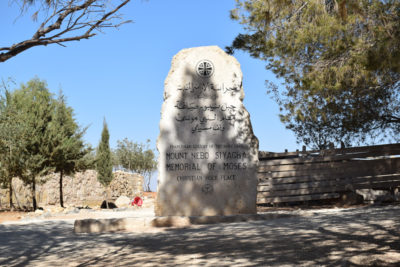 Mt. Nebo was on the way to the Dead Sea and we stopped there first for a little look around. There is a whole bunch of religious significance here and they offered guides (we did not take one) to give you a more in depth visit. We enjoyed the views of the valley below where you could spot the Dead Sea and the map showed that not too far in the distance was Israel and Palestine. A beautiful and heavily touristy area, we didn’t stay too long. The Sea awaited! 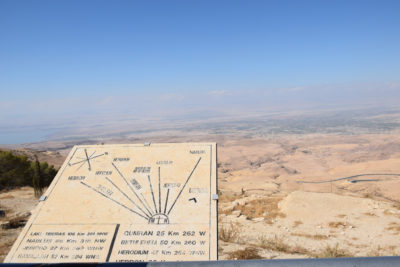 The minimal research we did prior to the Dead Sea visit showed us that there wasn’t actually that much information out there, or at least it wasn’t too clear. We were trying to figure out if you just pop into a public beach, what the costs were, where the best place to go was. Nothing really came up that helped us. It was clear that it cost money to visit the public beach but there was no set cost anywhere that we could find. 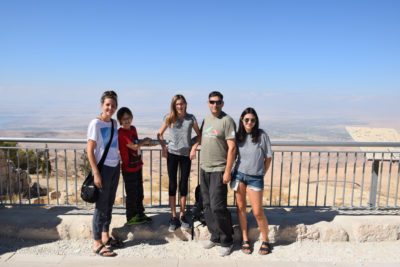 In the end we opted to pay a little more and use the facilities at a private hotel on the waterfront. We paid for a day pass to the Dead Sea Spa Hotel and I’m very happy we did! We had access to full change rooms with showers and there was the cafe by the (many) pools if we got hungry (I brought snacks because heck no we weren’t buying food there, it was soooo expensive :)). The kids even had a water slide to play on, but that was after we got our float on! 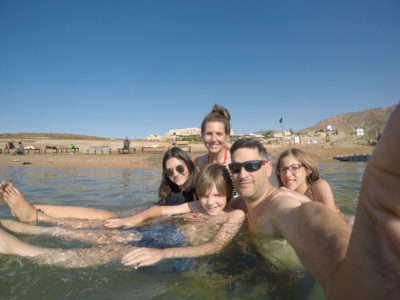 Walking down to the edge of the water it felt like a normal beach. However, people were sitting around all covered in mud! It was a pretty hot day so we all got in the water and after a minute of trying to fight against the float, a normal reaction I think, we settled in nicely to a lounge position and all just enjoyed! 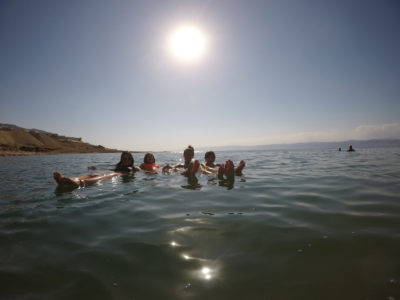 We all tried the mud, some more than others. Saw other tourists have trouble getting their float on. They had a lifeguard there to help as I’m guessing the high salt content throws many people off and they don’t know how to react to it in the water. It was nearly impossible to “swim” on your stomach. Back float was the only way we could do it. 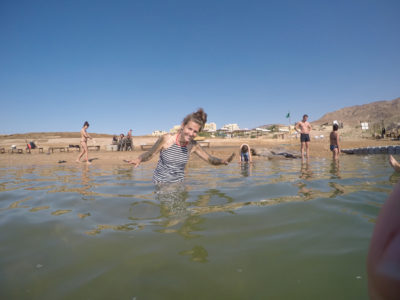 The whole day was spent at the Dead Sea and only when the flies got bad (and they got pretty annoying) did we head back to Madaba to our hotel. 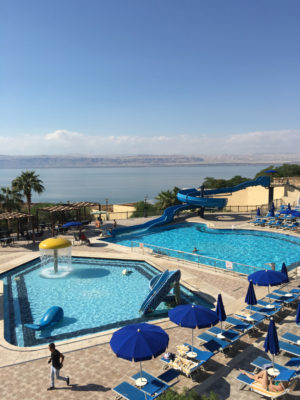 We'll miss our Greek salad and our GPS!