We arrived in Florence straight from Venice. We had a very late check in of 6pm for our airbnb and so we decided to drive straight into the city, park and explore for a while. Driving in an old city with narrow roads was a whole new level of crazy! We followed the P for parking signs down what seemed like little alleys. We had no clue until I got out the car to walk and check as it seemed easier and the parking attendant was just walking by. I luckily used hand language (the language of choice when no one speaks each others native tongue). We worked it out and he pointed to the spot for us and pointed to the board for the amount per hour. Gave us a receipt and we were on our way to explore. First we needed to pinpoint our location on our phones so we could find the parking again! 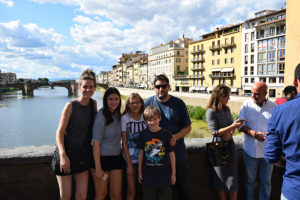 We ended up only being a a 10 minute walk to the Duomo in the city. It was grand!! To show us how popular it was, we lined up with the hundreds of people. Within seconds we had vendors all over us trying to sell us scarves. They were telling me I needed to cover up to get into the Duomo and needed to buy 2 scarves. One for my legs, one for my shoulders. Apparently I didn’t get the memo on dress code for churches….or perhaps I did but didn’t realize my “mom attire” was that riske!!

Getting to the front of the line, the security denied my entrance and I refused to buy the scarves from the aggressive vendors so the fam went in and I stayed out to wait for them. I did get to see it through the magic of Facetime though! 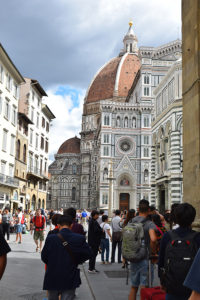 While outside I people watched and saw a vendor that was selling Splat Balls (if you have kids you may have seen them, if you don’t have kids then they are exactly how they sound). So I was going to get the kids one for 1 Euro (good enough deal). As I was speaking to the vendor he started acting a little sketchy. He was nervous and started walking away and asked me to follow him. Hell NO! I was in a crowded square and we were going to keep it that way.

As he moved away I noticed around me all the other vendors were packing up quite quickly and running out the square. All of them! Turns out someone signaled them as the police had come in to do a patrol and the vendors had to scatter to the outskirts of the area. Standing guard just off to the side with all their stuff, they waited for the police to leave. This wasn’t their fist rodeo obviously!

20 minutes later I met back up with the family, who had been looking for me for 15 of those minutes. hahaha. I had assumed they loved the Duomo and were taking their time. In reality I had moved from where I had left them (and in to a cell service dead zone) and it was me they were waiting for. 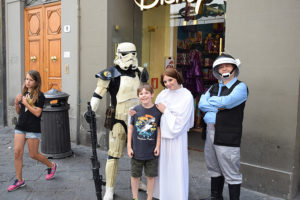 Florence was a beautiful city, there were lots of designer stores, expensive jewellery booths and gelato that was triple the price compared to Venice!! To our happy surprise we found a carousel ride for the kids for only 1 euro. 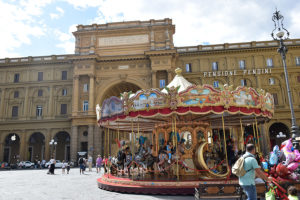 Our airbnb was ready for us and we left the city. The space was basic inside, but the backyard held a pleasant surprise. There were fruit trees and a garden. The host told us to take whatever we wanted. Although it was slim pickings as the summer had been super hot and most things had dried up, the kids and I were able to find some peaches from the trees and a tomato from the garden. On top of some freshly picked fruit, the kids got to see their first lizards in the backyard!! 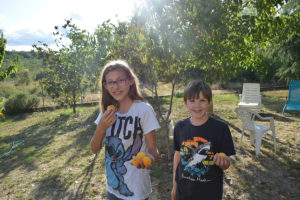