I can’t believe we saw this much in ONE day!

We finished off our time in Luxor at the Compound, said goodbye to our wonderful hosts and hopped into a cab to take us to the dock where our Nile Cruise was waiting! Yes, we splurged on a cruise. 4 days of all you can eat!! er… I mean, important cultural sites along the famous Nile River 🙂 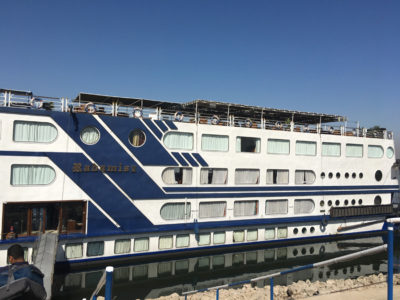 Our check in time was 9:30am. After checking in and sorting things we decided to get back into our cab and have an entire day of exploring Luxor. The cruise was staying at the dock overnight and we wouldn’t leave until the next day so why not explore more! 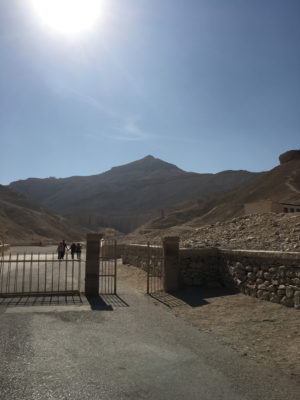 Our awesome cab driver took us to The Valley of the Kings which was AMAZING!!! Unfortunately I have almost no pictures from there. No camera’s allowed (even though we did see a few) but we didn’t want to get in trouble with security and get kicked out. haha. We saw three tombs, all different and interesting. They hieroglyphics we very well preserved and how neat was it just to be in the tombs of the ancient Egyptians!! 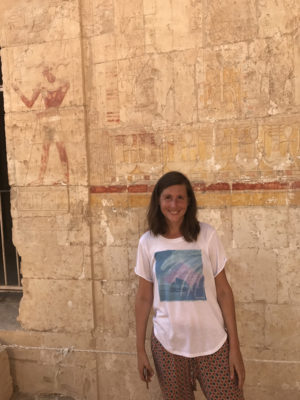 We then drove around the corner to another temple. The Temple of Hatshepsut. A very grand structure (and very symmetrical also which I loved :)). We explored as much as we could in the intense heat but as it this temple was mostly outside we didn’t last long. 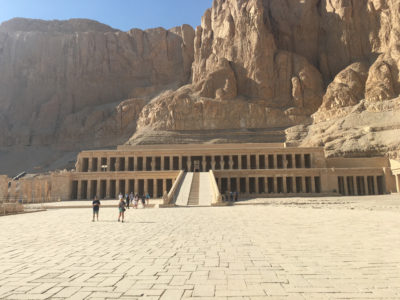 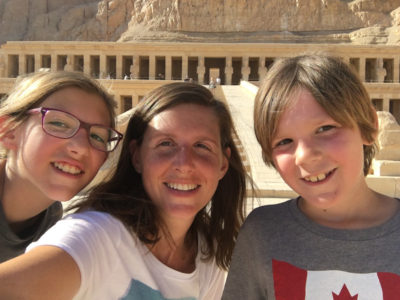 We made a quick stop to the Colossi of Memnon. Only Mark got out of the car to take a few pictures. We were still trying to cool off from Hatshepsut. Also, the vendors were very aggressive here with the other tourists and we didn’t want to brave that!! 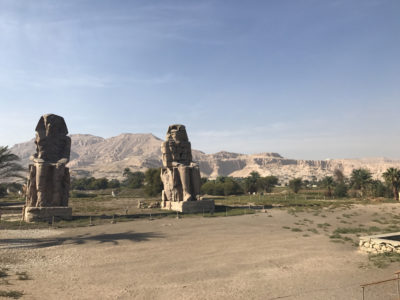 Soon we were at the water front. We took a boat across the Nile to the east bank to see Karnak. Karnak is a huge Temple complex. We were short on time as we had ordered lunch from a nearby restaurant. It was just Pizza. They didn’t have it I guess, so they went and picked one up at a pizza place for us and just dropped the box on the table. They didn’t even try to make it look their own, haha. And it took forever!! 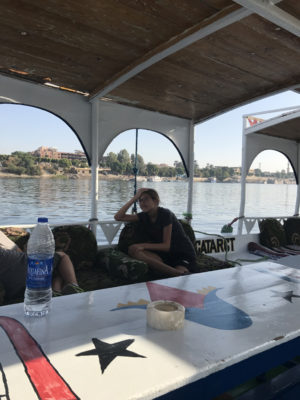 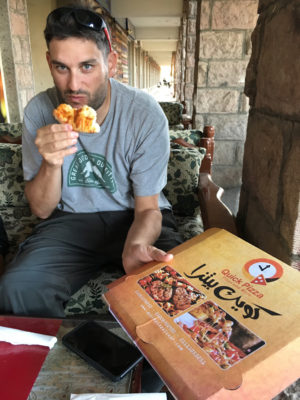 Back to Karnak, we moved quickly, got our tickets and went in to explore. The complex was honestly more massive than I would have dreamed of. Ruins everywhere, and well preserved columns covered in Hieroglyphics were all around us. It was insanely busy with tourists but because the complex was so large there were many areas where you were alone. 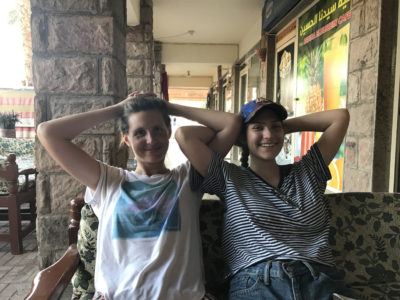 I would have taken hundreds of pictures that day but because of not being allowed to have a camera at The Valley of the Kings, we left it behind on the ship and only had our phones and our batteries were getting low and we still had one more stop! Talk about stressful!!!! 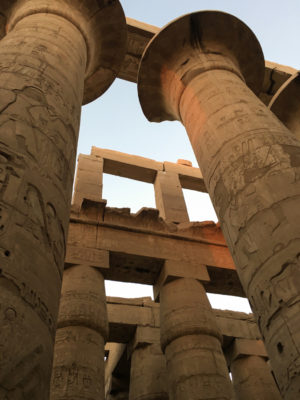 Our driver was waiting when we finished up at Karnak. Our last stop of the day (which by now had become evening) was Luxor Temple. We arrived right at dusk and I was a little disappointed we wouldn’t have daylight to view the temple but when we arrived to the entrance and I saw how everything was lit up I was so happy! In the end, viewing Luxor Temple at night was amazing. The lights made everything have a very moody and interesting glow. 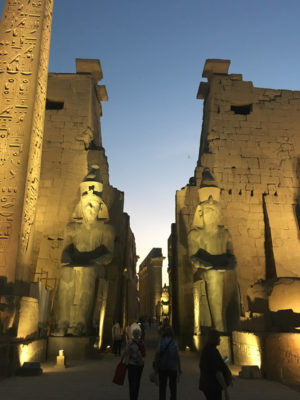 The temple was gorgeous and had so many hidden rooms to explore. Running our hands over the sandstone and feeling the carved in hieroglyphics was a surreal experience. Every now and then we’d pass a guided tour and learn just a quick fact about the temple too. 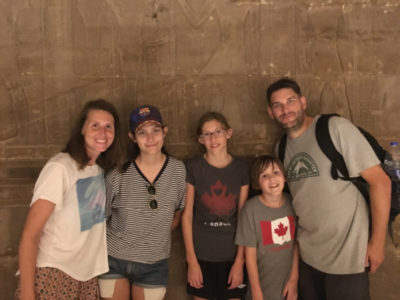 We made it back to our ship in time for dinner and enjoyed our first buffet of the trip! We were very surprised when the waiter brought over a special cake to celebrate Taylor’s 16th birthday today!