It was finally time for us to leave the Amalfi coast (we were ready! The oddly laid out rental with no WiFi had lost its charm days before haha). The 4 hour drive to Rome was pretty easy. We had gotten used to the crazy drivers on the roads until we hit the city that is. Rome was a whole new ballgame of drivers! Luckily for us we were on the outskirts and managed alright.  Our host welcomed us and we finally had WiFi back and were able to relax on a couch (Agerola rental did not have one). 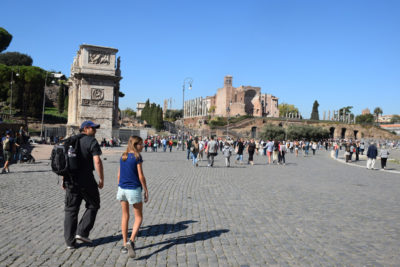 We woke up the next morning ready to explore! We bused and trained into the city, right to the Colosseum actually. It was huge! and so, so busy. Again, we thought most of our travels were off season time but the crowds showed us that tourist season was still in full swing! 30 minutes in line got us a time slot for later in the day so we took advantage of the dual admission and went to the Palatine Hill and Roman Forum. Another site with ruins and really old things to see (the kids just can’t get enough of ruins, kidding!). 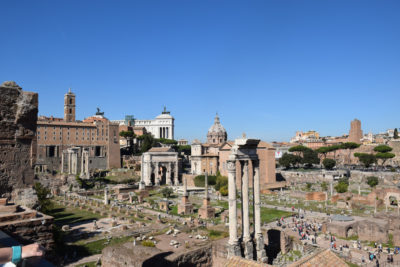 Soon we were in line for the Colosseum. One step inside and it was awesome. So huge, grand, ancient, and any other adjective that describes this amazing place. The size from the outside hid the huge feeling that you got when you were inside. You felt tiny and if you could imagine you were 1 out of 80,000 spectators then you really understood the size. 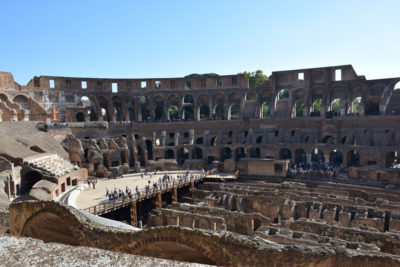 We left after an hour and a bit. The bit was the extra time we walked around trying to get on to the lower level. This was just for guided tours or more expensive tickets we concluded. Too bad as we would have loved to be under the stadium where the gladiators were held but we had to move on. More things to see! 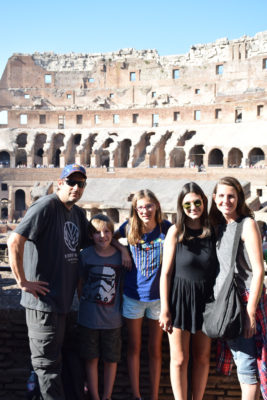 The Trevi Fountain was one of those things! We walked the streets (very busy streets with people, no cars as roads were all blocked off, not sure why). Looking for the fountain we literally turned a corner and there it was AND there were all the people. Hundreds and hundreds of people all crammed around the front. We waited and pushed our way to the front where a very helpful man took our picture and then tried to sell us a Polaroid image for 5 euros and became visibly unhappy with us when we wouldn’t buy it….anyway, we got the shot in front of the fountain, moved through the people to the side of the fountain where surprisingly it was very open and hardly anyone there. We tossed our coins in and made our wishes and moved on to another Rome site. 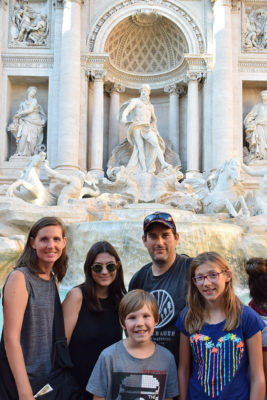 We walked to the Spanish steps and were met with hundreds of people again. Rome was definitely a busy city!! We were able to find a small spot on the steps and took a break and admired the view of the sunset. Soon we were going to hop on a bus ‘home’.

It was evening and buses were busy. In fact people were busting out of the bus, there was no way our 5 would fit on the buses with how packed they were. Soon the bus came, the H bus actually. The bus we were so sure would take us back to our train station. We hopped on and after 2 minutes the bus pulled over and the route was done, we were kicked off and ended up walking all the way back (pretty much) to where we caught it to begin with and took the tram instead. In the dark with iphones (for google maps) almost dead and 5 tired bodies from exploring all day we were very pleased to be on that tram!

As much as the H bus threw us for a loop later in the day, Rome was still amazing. I loved the city, even with how busy it was.

With our luck it would blow that day!