So after our long day out exploring in Rome (Colosseum, Trevi Fountain and the Spanish Steps) we needed a good down day. We had a lazy morning, caught up a bit on school work (it was getting hard to get any done most of these days) and let the kids watch some movies since we finally had a decent internet connection, yahoo!!

But you can’t rest all that much in a busy city like Rome so the next day we were up early and out the door to see Vatican city! 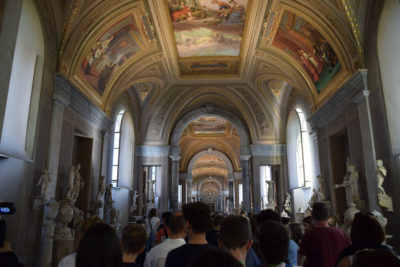 We arrived and I was blown away by how beautiful it was. The court yard was huge and we saw a very long line. Realized it was for St. Peters Basilica and decided to come back. Made our way to the Vatican Museum and waited our 45 minutes in line patiently. I say patiently because every so often you would get the vultures, er I mean tour company employees trying to sell you the quick entrance.

We got in, paid and went through security where Mark was told his backpack was too large and needed to be checked. As we saw many people walking around with same size bags we ducked around and bypassed the bag check, we are rebels!! 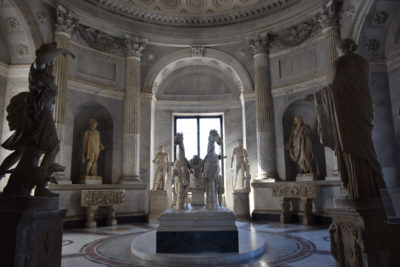 We started walking and I admit, the museum is beautiful. Not particularly kid friendly but we still enjoyed seeing everything. Soon we were ready for the Sistine Chapel. Little did we know you have to keep going through the ENTIRE museum, somewhat like cattle with all the other tourists. We were getting closer and and just about there. The big moment had arrived. This Sistine Chapel that I’ve heard so much about, I was ready for the huge grandness and had my camera ready! 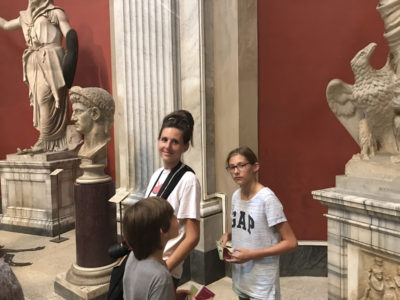 Denied! No cameras allowed! There were signs everywhere now that we were closer. No cameras allowed. I was utterly confused. We had been allowed to take pictures of whatever we wanted up until that point. How was this going to be different. Hmmm.

We entered the room, again, like cattle. Herded from one door and into the middle of the room. The security were ruthless and yelled and degraded a woman right in front of us. She had taken a picture. I suppose she broke the rules, but the security took it upon themselves to make her feel horrible and like she had just committed a crime, pretty much called her stupid. Oy, this was not the experience I was looking forward to. I hadn’t even had a chance to look up at the ceiling yet!!!

Around the room we were moved and the space was slightly underwhelming (to me). The ceiling was beautiful but the security guards just dampened the whole thing. I moved away from the group and towards the exit. The whole experience was just odd to me.

On the way out we didn’t linger long, had a quick snack in the cafeteria that was closing early and then we were out and around the corner at St Peters. The line had shortened and our wait was next to nothing. The inside of St Peters was stunning. I mean beautiful. I mean HOLY CRAP gorgeous!! I loved it. You could take all the pictures you want! 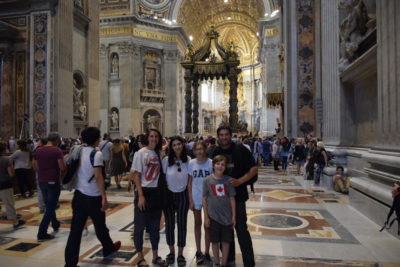 So we left after a great time exploring Vatican City. There was something that just wasn’t sitting right with us about the whole Sistine Chapel experience. Why could we not take photos. I know that many places say No Flash to preserve the artifacts or art, this was something different. We found the answer soon enough. The ban started because a Japanese media company had owned the photography rights to the art in the Sistine Chapel after they paid for the restoration in the 80’s . WHAT! Apparently the ban on photos was not intended to include ordinary tourists but it was enforced that way anyway. The deal with the Japanese media company expired in the 90’s but the ban on photography remains for some reason. Interesting information to end an interesting day. 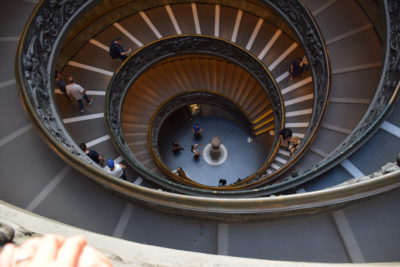