No cars makes for a great day!

We stayed in a remote (remote to me!) small village about 25 minutes from the train station that would take us to Cinque Terre.

We had only one bedroom and a sleeper sofa. There ended up being no wifi although it was advertised and the kitchen was super basic, and the oven didn’t even work. It was going to be an interesting experience for the two days we were there. Oh, also, there was a hidden step from the living room to the hallway that we all missed and tripped over multiple times. oops

The next day we made it to the train station and started our 5 town tour! We stopped at every single one of them. Lots of walking, lots of picture taking of these cute towns built into the wall of the mountain. The towns were all adorable in their own way. We joined the locals down by the boat launch area in Manarola and put our feet into the clear and warm Mediterranean waters. 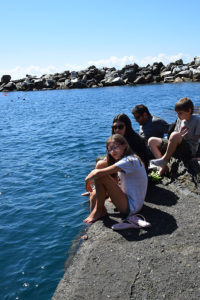 We made it to Monterosso and bought a cute beach blanket from a vendor (wish I had bought more!!) and spent a couple hours on the beach. Mark and the kids swam while I soaked up the sun (first time in a couple months!!) I watched as vendors walked by with cute things and then there were these ladies that kept coming by. I had no idea what they were selling until the lady beside me said “Yes”. It ended up being a massage. This lady had her massage cut short when the police called down to the ‘masseuse’ to stop. They were very strict with no vendors which was nice so you could relax more, and so we did!! 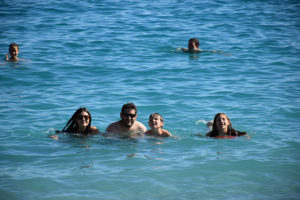 A boat ride was in order to mix up our transportation. On the way home, instead of a quick train ride, we opted to get a boat to the next town for fun. It was great to see the towns from the water and who doesn’t love a boat ride! 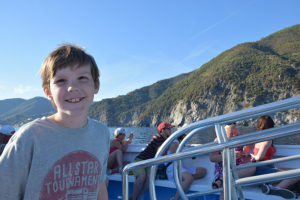 More gelato for us (I swear we have consumed our body weight in gelato). Then the train home. It was a great day and Cinque Terre was a lovely place. I realize now that besides being cute, there were next to no cars and we didn’t have to brave the Italian drivers because we took the train. This was my kind of traveling! 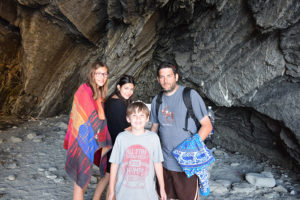