Please check your ego at the door Mr. Security

Something you should know about the way we have chosen to travel thus far: we have not been booking anything more than a week or so in advance. This was either going to help us or hurt us. In the end it kinda did both. Like in Amsterdam, we were left with slim pickings and had to stay on the boat (turned out great in the end). In the case of our next stop, I believe the last minute planning was a huge break for us.

We were looking to book in a specific area about 3 hours south of Nice. This area was our half way point to Andorra (you’ll read more about that later). Everything we found in that area were small apartments, NO ONE had wifi (so strange to me) and there wasn’t much to chose from. I have no idea how we saw it as it wasn’t exactly the area we were looking, but an airbnb listing caught my eye. It was inland a bit and was a resort!! A full blown, multiple pool, restaurant, bike rentals, stores, bakery and hairdresser resort! 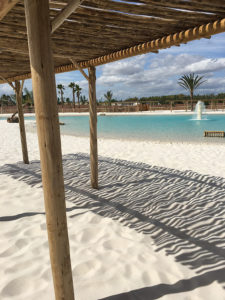 Our room was actually a hut, with 2 bedrooms and small living room with kitchen. Not a huge space but better than an apartment. 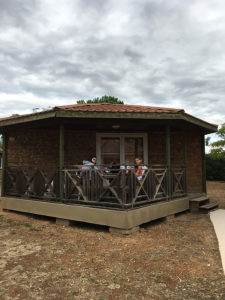 We arrived and all got our bracelets ( so they know we weren’t sneakers), made the beds (had to bring our own sheets, ugh), completed the checklist (they were very thorough there). When this was done it was just before 7pm. We walked to one of the pools that was the closest to us and we were denied entrance. You see, it was 6:52 and they closed at 7. I thought to myself that the kids will have just under 10 mins to get some energy out and have fun. Nope, the security (because we were slowly beginning to see this place was a tad mixed up when it came to operations) refused to let us swim as they said they were closed. In my best french, I tried to understand how they were closing early and then I got a tad flustered and frustrated with them as they laughed at me for using incorrect words and the situation became worse. I was annoyed (no, I was really angry) about how we were being treated and laughed at. With nothing I could do, we went back to the hut to tell Mark. We realized the big pool was open until 8pm and so we tried there. The kids were in the water no more than 30 seconds when I had security over again. I thought “no way they are closing now!”. Instead of closing time, we were told in a very condescending way that Lucas could not be in the pool with his swimsuit. You see, in France there is a law that all bathers (male) must be in a speedo type suit and no swim trunks aloud. Mark googled it there to make sure the guy was telling the truth. 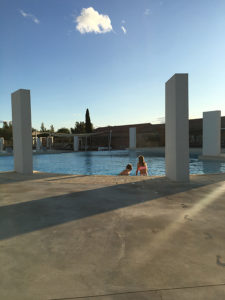 Out we went, one crying kid, one mad mama bear and no swimming for us. This security guard was an ass at first, and I told him in french that I thought he was mean. Once I said that he lightened up a bit and told me he didn’t intend to be so harsh but rules are rules.

Looks like the boys would be getting some speedos the next day!!!

Speedos for the boys!